Scotch Broom (cytisus scoparius) is a perennial shrub in the legume family with a wide range of medicinal and practical uses. Scotch Broom can be invasive in some areas, and should not be grown outdoors in California, Oregon or Washington and parts of the East coast. Elsewhere, scotch broom is cultivated as an ornamental plant, bearing copious amounts of yellow flowers. Scotch broom bark can be used to make yellow and brown dye, and the flowering stems can also be used for a yellow dye. Additionally, green dye can be made from the leaves and young growing tips. The fiber in scotch broom stems has also been used like hemp fiber for a range of different purposes.

Reaching up to seven feet in height, scotch broom is hardy to zone 5 and can handle freezing winters. As a legume, scotch broom can help elevate the nitrogen content in the soil, thereby improving the growth of other companion plants, and it seems to help attract wildlife. Scotch broom can grow in a wide variety of soils, including very acidic and nutritionally-deficient soils. But scotch broom does like its soil to be well-draining. The plant is commonly found at the edge of woodlands in dappled shade, so it enjoys partial shade to full sun.

Scotch broom buds have actually been pickled similar to capers, and the bitter young green tops have been a substitute in brewing for hops, possibly even adding to the potency of the beer. The beans were even used as a coffee substitute by settlers coming from Europe. However, any type of ingestion of this plant should be fully researched because the leaves and beans contain some potentially toxic alkaloids. While there have long been extensive edible and herbal uses for the plant, there is also a debate as to whether the plant’s toxicity means it should be avoided altogether.

As a medicinal herb, scotch broom is said to be a significant diuretic, as well as a cardiac stimulant. It contains the alkaloid cystine, which can act like nicotine. But caution should be taken in any type of use. Just about all above-ground parts of the plant, including the seeds have traditionally been used in some fashion for herbal use. The flowering tips collected in the fall are said to have the highest alkaloid content, although scotch broom can generally vary depending on growing conditions.

Growing Information: Scotch Broom seeds have a hard seed coat that must be broken down before germination. You can file or nick the outside of the coat to allow moisture in, and then soak the seeds for 24 hours before sowing at a depth of about 1/8″. Alternatively, you can use the Hot Water Tek. Although this initial, short-term exposure will not hurt the seed, the soil temperature during germination should be no higher than 68 degrees Fahrenheit. Some seeds that do not sprout may do so later, and germination may be irregular. So do not discard them. It is possible for scotch broom seeds to remain viable for decades. Choose a soil that is well-draining, preferably sandy and acidic. Scotch broom prefers low to moderate moisture. Dead branches can be pruned from mature trees as needed, but wait until the fall when the plant has finished flowering to prune otherwise. 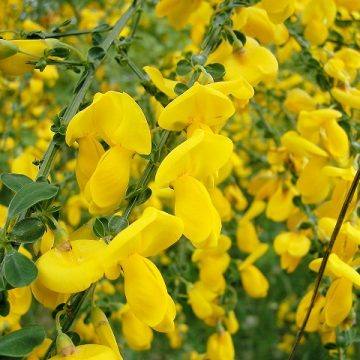