Leonurus Sibiricus, also called Siberian Motherwort, is a medicinal herb native to Southwest Asia but naturalized in many parts of the world, including several parts of South America. It has traditionally been utilized by the peoples of both Asia and South America for relaxation, male potency, calming female menstruation, rheumatism, arthritis, circulation and infections, especially of the respiratory system. Sibiricus is one of over 80 different species in its genus, which also includes other medicinal herbs like motherwort (leonurus cardiaca) and Chinese Motherwort (leonurus japonica). It is also closely related to wild dagga (leonotis leonurus)and klip dagga (leonotis nepetifolia) and shares one of the primary alkaloids, leonurine. In addition to leonurine, sibiricus contains several related alkaloids. It is ironic that the two leonotis species have become somewhat popular among those interested in traditional herbs while leonurus sibiricus has stayed more or less a secret. The irony not only lies in the similarity but the fact that many people who are familiar with all three plants seem to decidedly prefer sibiricus. A few sources indicate sibiricus as having lower medicinal value than the other plants, but that may be due to misidentification of sibiricus for one of the other 80+ species in its genus or perhaps generally poor material. Leonotis sibiricus is generally pretty easy to grow and can be grown using similar techniques as growing wild dagga and klip dagga seeds.

WE ALSO OFFER WILD DAGGA AND KLIP DAGGA seeds as well as A VARIETY OF DAGGA PRODUCTS. 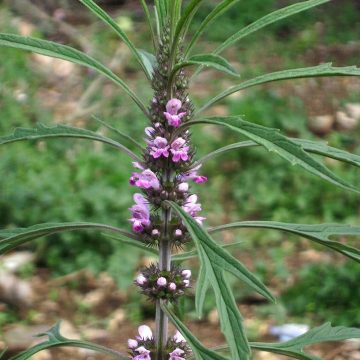