Leonotis Leonurus, better known as Wild Dagga or Lion’s Tail , is perhaps the best known of several sedating medicinal plants in the same family.  Wild dagga is sometimes mistaken for its common cousin, leonotis nepetifollia, aka klip dagga.  While both species have similar flower clusters displaying silky bright orange petals, and they both contain the active compound, leonurine,  there are several fundamental differences that can be used to easily distinguish the two. Wild dagga has long slender leaves, whereas klip dagga has spade-shaped leaves with serrated edges. Klip dagga seed pods are composed of very sharp spikes that are not present in wild dagga pods. You can handle wild dagga pods much more easily. And although both have bright orange petals, those of klip dagga tend to be red-orange.  Both plants are used herbally for things like coughs, fever, stress relief and relaxation.  The pure orange petals are said to have the highest concentration of leonurine compared tot he rest of the plant.  Many people seem to think that klip dagga is the stronger of the two. However, when it comes to the whole dried flowers, wild dagga is far superior.   The leaves and pure petals of each of the two species is a bit more comparable. The seeds can sometimes take a bit to get started, but these plants usually grow like weeds once they are started. Even a single plant will provide plenty of foliage each year. Wild dagga is a bit more reluctant to flower in northern climates. It should be given good light and adequate root space. Once a plant is started, it becomes shrub-like, and the tender shoots can be used to propogate new plants relatively easily. Wild dagga is the type of flower that will stand out in a flower garden, and it is a staple to any ethnobotanical garden. WE ALSO OFFER KLIP DAGGA SEEDS & A VARIETY OF DAGGA PRODUCTS. 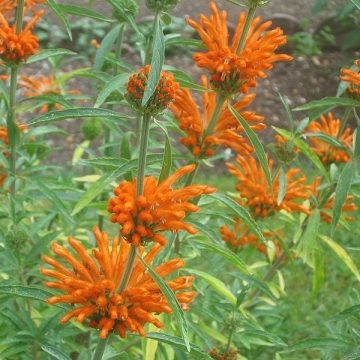