Apocynum Cannabinum, known commonly as Dogbane, is a poisonous hardy perennial herb growing to four feet. As the species name cannabinum indicates, it is correlated to hemp. In fact, dogbane is called names like Hemp Dogbane and Indian Hemp for its use as a fiber plant. Native Americans used dogbane as a source of cordage to make things like nets and line for fishing. Dogbane does not contain hemp’s other properties, and you’d never want to make the mistake of trying it for such reasons because all parts of the plant are poisonous. Dogbane exudes a latex that can actually cause severe irritation and blistering just by touching it. The genus name apocynum actually means “poisonous to dogs”, which explains the name Dogbane. Ingestion by dogs or humans can cause cardiac arrest. Nonetheless, dogbane joins the list of poisonous plants that have a tradition of medicinal use in homeopathy, especially by sufferers of rheumatism. Some even refer to it as rheumatism weed. But use of this plant medicinally should be avoided by anyone but professionals. Always wear gloves when handling the plant. The stems are harvested in late fall after the sap has moved to the roots for winter. By this time the stalks have turned red. Dogbane stalks can also be collected in the winter when the stalks are dry and brittle since they are easier to manage in that state.

WARNING: This plant contains compounds that are poisonous if ingested. Do not ingest for any reason and keep away from curious pets and children.

Growing Information: The long seeds should be sown on the surface of a medium to fine soil. They do not require light to germinate, but they should not be buried because seeds can often germinate only to stay trapped below the soil when trying to emerge.  Keep the seeds moist and in partial shade. The seeds have been known to germinate within a pretty wide temperature range, but about 68 degrees Fahrenheit seems ideal. Like many wild seeds, dogbane seeds are unpredictable. Sometimes seeds can remain in the soil as long as two years before sprouting. Temperature fluctuations can often help trigger germination in seeds like this. Moist cold stratification may be beneficial as a pre-treatment for these seeds. This is a technique that simply involves putting the seeds in a moist medium, which can be a moist paper towel, then putting the seeds in the fridge for several weeks before sowing at normal temperatures. If you are storing the seeds for a period before sowing, do so in the fridge. You should be able to store up to 3 years. Dogbane has a tendency to spread underground, so take measures for containment. 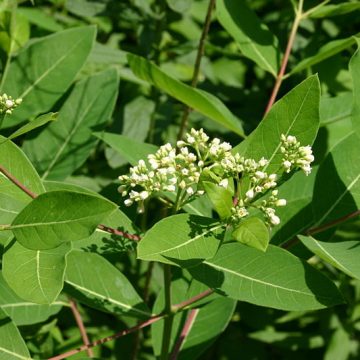