This semi-aquatic, cold-hardy perennial has an attractive grass-like appearance and is native to riverbanks and wetlands of Southwestern U.S., but has now been spread around the entire eastern United States and much of the west coast. Its flowers are yellow to green and form in the late spring to early summer. Although calamus is considered a semi-aquatic, it can easily be grown in a yard or garden. Potted plants will be significantly shorter than those in the ground, which can reach 6 feet in height, and subsequent plants can quickly and easily be obtained by division of the plant’s rhizomes.

Growing Information: Growing from seed is fairly straightforward. Cold stratify the seeds by placing them in a folded, moist paper towel and putting them in the fridge for four weeks. This simulates winter. As an alternative, seeds can be sown outdoors some time before the end of winter for natural cold stratification. Following this cold period, plant the seeds 1/8 inch deep in a rich soil mix with plenty of organic matter. The change in temperature will let the seed know it’s time to germinate. After the seedlings are established, place them in partial sun and be sure to always keep the soil moist. 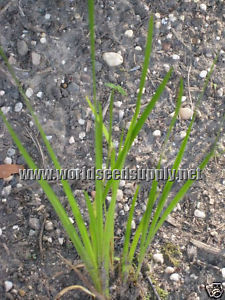