Marshmallow (althaea officinalis) is more well-known as the sugary treat that it can be used to make than the plant itself. Marshmallow a.k.a. Marsh Mallow, is an ornamental and medicinal plant that is indigenous to Africa. Growing to be about 3-4 feet in height, this hardy perennial has attractive five-petaled pinkish-white flowers. Marshmallow leaves are used fresh or dried. They are eaten in salads, as vegetable or made as a tea. Marshmallow’s use as a medicinal herb has extended for thousands of years with applications that include asthma, bronchitis, colds, coughs, Crohn’s disease, heartburn, inflammatory bowel disease, sore throat, stomach ulcers and ulcerative colitis. Most of these remedies are due to the mucilage found in the leaves and roots. This gelatinous substance has the ability to coat the digestive tract and throat. And it is this same substance that lends to the consistency of the sweet treat it can be made into. And it seems that the treat had its beginnings as a sore throat remedy. The evolution of the marshmallow appears to have begun with the Ancient Egyptians. But it was also influenced by the French who eventually replaced marshmallow mucilage with simple gelatin because gelatin was easier to acquire. But for vegans, you can still find suppliers that use this plant as the basis for their marshmallows.

Growing Information: Marshmallow seeds tend to have slow and irregular germination. Some growers will choose to cold stratify their seeds by placing them in a moistened growing medium and putting them in the fridge for 4 weeks. The seeds should be covered with only a thin dusting of soil. Research show that they will germinate much better in light than in darkness and that optimal germination occurs at about 70-85 degrees Fahrenheit. Seeds can also be started outdoors in the early spring or in the fall so that they can experience natural temperature fluctuations. Marshmallow grows best in a light soil with a PH of 6-8. As indicated by the “marsh” in its name, marshmallow prefers a soil that is continuously moist. It can be grown in zones 3-9 and prefers full sun. A spacing of 1.5-2 feet between plants should be maintained.

International buyers must assume risk of arrival on all items. We cannot replace lost or seized items. You will be required to confirm that you agree to these terms before items can be sent. 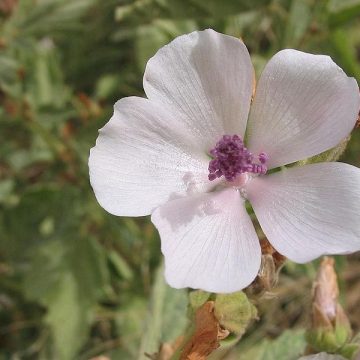