Verbascum Thapsus, known as Great Mullein or Common Mullein is a hardy biennial-perrenial found throughout much of Europe and the United States. It has long been used as a medicinal, acting as a mild sedative and narcotic, an emollient, an expectorant and an astringent. It has traditionally been smoked or made into a tea for coughs and asthma. It is also applied topically for a variety of other ailments. Both the leaves and flowers are used. It is resistant to pests and disease, which might explain some of its astringent and antiviral properties. In its first year, mullein forms rosettes of thick, hairy leaves that somewhat resemble those of tobacco. The following spring a stalk sporting clusters of tiny yellow flowers emerges from the center of the rosette. Mullein can reach 6-7 feet in height. The plant also creates fluffy chaff that makes excellent tinder and was used to make wicks before the use of cotton. The stalks of the plant were also traditionally dipped in suet to be made into torches. Mullein was even reportedly used for making dye.

Growing Information: Seeds can be sown directly outdoors or started indoors. Sow seed on the surface of the soil without covering and keep damp. Typical germination time is around two weeks. Thin your plants to about 16 inches apart because they will flush out. This plant prefers disturbed soils and does well in soils containing gravel, rocks, clay or chalk. For best results, your growing area should be open with good sun exposure. 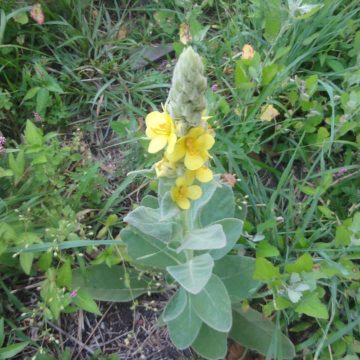