Nicotiana Glauca is a yellow-flowered species of tobacco known as Tree Tobacco. Tree Tobacco earned its name because it can reach heights of 25 feet. This native of South America (particularly Bolivia and Argentina) has become widespread elsewhere, including the southwestern U.S. Nicotiana Glauca is considered a very powerful nicotiana species, but it does not contain significant levels of nicotine. In fact, it is actually being studied to treat nicotine addictions. Instead of nicotine, Glauca’s primary constituent is called anabasine. It is possible to overdose on anabasine from Tree Tobacco, and its effects can reportedly last more than a day. As a result, extreme caution should be exercised with this plant. It should not be grown near children or curious pets. Nicotiana Glauca was widely used throughout the Amazon for a variety of medicinal purposes, and it was considered a sacred herb. The leaves were used, but the flowers and seed pods are reportedly more potent. And the effects from each of these are said to differ. Glauca’s exact use varied from tribe to tribe, but nicotiana glauca was commonly seen at ceremonies along with other sacred plants. Like other tobaccos, nicotiana glauca can be used to induce vomiting. It was burned as a smudging herb for protection as well. Like other tobaccos, nicotiana glauca has insecticidal properties that can be used in gardening. The plant blooms into the late fall months, and it is hardy to zone 8. Elsewhere it can be grow as an annual. Tree Tobacco prefers moist, fertile, well-draining soil in a location with full sun. Seed count is based on a 20,000 seed per gram count. WE CARRY OVER 20 TYPES OF TOBACCO SEED !!

**WARNING: THIS PLANT CONTAINS TOXINS THAT CAN BE DANGEROUS IF INGESTED. KEEP AWAY FROM CHILDREN AND CURIOUS PETS. 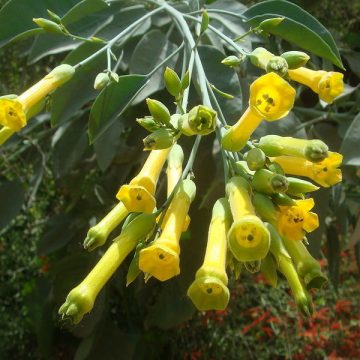