Surprisingly, the datil pepper is still relatively unknown around the world despite being all the rage in north Florida.  This heirloom pepper was originally brought over from Minorca, Spain to St. Augustine, Fl when the Spanish gave control of Florida to the British following the Treaty of Paris. Even though Minorca is a Spanish island, it was controlled by the British.  The Datil was grown commercially in Florida, and despite St. Augustine being a bustling city of tourism, the Datil has not found its way into the gardens of growers as have many other peppers have that came to the U.S. after. Yet, around these parts, the datil can be found in backyard gardens, farms stands and local sauces all over. It is one of the most popular peppers. The datil pepper is a capsicum chinense variety, and it has the fruity undertones of a habanero. It is often touted as a less spicy pepper. But the truth is that is can range from about 100,000 to 300,000 SHU. That puts its top end of the spice range where a habanero usually begins. The Datil pepper starts out green and matures to orange. Early in the green stage, and in younger plants, these peppers are a less spicy alternative to the habanero for those who like the taste but prefer a little less heat. Datil peppers are often able to go on as perennials here in Florida if they do not get a hard freeze, and the older plants and intense sun are capable of putting out peppers on the spicier end. There is a sweet Datil variety that matures to red, but this is the spicy one. We are happy to bring this pepper to market and spread it far and wide. Give these plants plenty of bone meal and sun, and they produce abundantly. 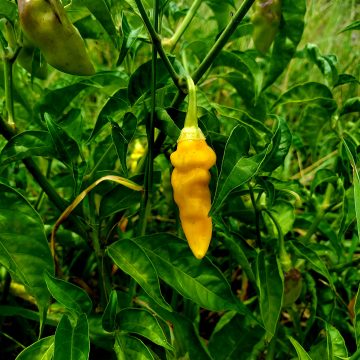