Ruta Graveolens, simply known as common rue, is a pleasantly aromatic, bitter flowering herb that is native to southern Europe. Common rue is a perennial herb characterized by a bluish green foliage with 1 centimeter yellow flowers. It is a favorite food source of swallowtail caterpillars. The plant is adaptable and tolerant of rocky, dry conditions. Rue is deeply rooted in history. The Romans called it the Mars herb and grew it around the temple of Mars. It has appeared in the writings of Shakespeare as well. Rue also has many uses in wicca and magic, including divination, purification of metal, exorcisms and protection. During the Middle Ages, rue was hung in doorways to keep out evil spirits and the Black Death. Today, rue’s repellent properties can be useful in your garden by keeping dogs and cats away. It repels fleas as well and can be used to clear intestinal parasites much like wormwood. As an herb, common rue has both culinary and medicinal uses. Although not overtly popular in the typical American kitchen, it was used in traditional Mediterranean cooking and can be used to flavor meats, eggs, cheese and fish. As a medicinal, the whole herb is valuable. Rue is used as a menstrual stimulant by inducing uterine contractions. This action also allows rue to be a powerful abortion-inducing substance when taken in high enough doses. Likewise, rue reportedly has contraceptive properties and was at one time was even used to deter pregnancy after intercourse. It can be used to induce vomiting. On the other hand, rue has also been used in low doses to treat stomach problems, reduce gas and stimulate appetite. It has been said that rue stimulates the production of bile to aid in digestion. Rue has also become associated with improving and preserving eyesight. It is a sedative that can reduce heart palpitations and is thought to be beneficial for cardiovascular health by improving the strength of blood vessels. Although the plant itself is a skin irritant to some people, rue is often applied externally as a bath for a range of conditions from gout to cysts to rheumatism. Rue should be avoided by pregnant or nursing women and should not be used for extended periods by others. High doses are toxic. ORGANIC HERB ALSO AVAILABLE!

Growing Information: Rue is considered hardy from zones 4-11 and will adapt to most growing conditions. A well-draining fertile mix is best. Rue seed is easiest if sown directly outdoors in the spring. It can be started in trofts to keep the seeds from blowing away before germination. Seedlings may also be started indoors eight weeks before the last frost and transplanted outdoors when the soil has warmed. Seeds should be surface sown or mixed with soil and the mix scattered. Plants should be set at a spacing of 1-2 feet. Plants enjoy sun but have been said to do well in partial shade as well. Rue has average water needs but can withstand drought as well. 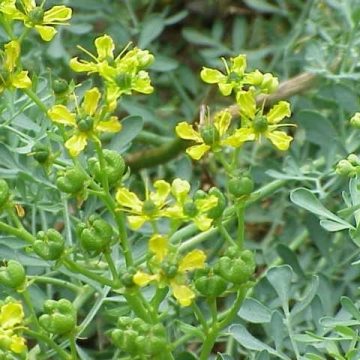