Russian tarragon is a common culinary herb that is related to wormwood and mugwort in the genus, artemisia. Fresh or dried tarragon leaves are great for seasoning fish, lamb and poultry, and they can help to freshen breath after eating. Russian tarragon has a mild anise flavor due to the presence of methyl chavicol, a mildly psychoactive compound found in other anise-tasting plants such as fennel, basil and not surprisingly, anise. Methyl chavicol is one of several compounds found in the essential oils of common herbs that are precursors to phenylethlamine, the so-called “love chemical” in chocolate. This compound is also found in high concentration in tagetes lucida, which is known commonly as Mexican (Spanish) Tarragon. Although Russian tarragon is considered milder than French Tarragon, French Tarragon cannot be grown from seed. Russian Tarragon also has a propensity to reseed itself, so you will typically have the herb in greater supply. Russian Tarragon’s milder flavor can be preferable when used fresh, such as in salads.
Like most culinary herbs, Russian Tarragon has a wide range of medicinal uses. Russian Tarragon is among the highest in antioxidants among common herbs, and it is a good source of calcium, potassium, iron, magnesium, manganese and vitamins A, C and B complex. It is also a pretty significant source of protein. A hundred grams of tarragon leaf would provide nearly half the recommended daily requirement of protein needed for the day. Tarragon leaves can be made into a tea for those suffering from insomnia, and tarragon is said to be a blood cleanser. Tarragon can help stimulate appetite and encourage digestion. Tarragon is also used like epazote, to prevent flatulence. Studies also show that tarragon extract may play a role in preventing clotting which could help prevent stroke and heart attack. Furthermore, tarragon has been studied for its role in lowering blood sugar levels, which could make it beneficial for diabetics.  As with all of our seeds, we offer NON-GMO tarragon seeds.

Growing Information: Russian Tarragon seeds should be sown on the surface of moist soil and then sprayed lightly. Some growers will soak the seeds overnight before sowing. Russian Tarragon enjoys a sandy or rocky soil with a neutral ph, preferably in full sun. Some shade is tolerable. Maintain a soil temperature between 65 and 70 degrees Fahrenheit. Russian Tarragon plants must not be overwatered, and they will actually benefit from a mild drought. Space tarragon plants about 2 feet apart. They will reach about 2-3 feet in height. You can begin harvesting leaves once the plant reaches 6 inches. You can propagate tarragon by stem cuttings, division and layering. 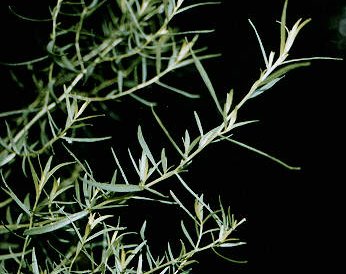