We offer several variants of this species. The “columnare” variety has a taller, more columnar stem. The ‘nudum” variety is characterized by a pure green stem. “Tricostatum” is extremely rare and has only three ribs instead of five. Similarly, “Quadricostatum” has only four ribs. “Onzuka” is a coveted and eye-catching Japanese cultivar.

This extra special variety is a combo of both the “Onzuka” and the “Quadricostatum” forms.  These seeds produce plants with the ornate texture of the Onzuka, but the rare four-ribbed structure of the Quadricostatum.  This is not a natively found specimen. This cactus is the result of remarkable breeding.  We also offer both the Onzuka and Quadricostatum forms of Astrophytum Myriostigma individually as well. Mature specimens of this cactus can sell for very high prices, especially for plants growing on their own roots. These are a great investment if you’re looking to start a nursery of rare cacti, or if you simply wish to invest in your own cactus collection. Most cacti enthusiasts become quite addicted to collecting rare and unique specimens, and these are sure to make you the envy of other cactophiles.

Astrophytum myriostigma is cold hardy to about 20 degrees Fahrenheit. For best results it should be given light shade, although it will tolerate full sun. During the summer it should be given moderate water and fertilizer, but it should be kept dry starting in October. An alkaline, porous soil will provide necessary drainage, and watering from below potted cacti so the water wicks up through the soil is recommended. Grafting will also help by lifting the cactus out of the soil where it may come into contact with standing water. Grafting on to faster-growing root stocks such as pereskiopsis, San Pedro and blue myrtle will also speed up growth. 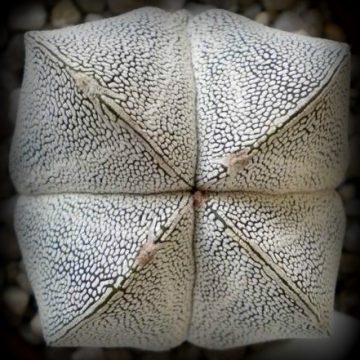