Peganum Harmala, also known as harmal or Syrian rue, is a bright green perennial plant that is native to the eastern Mediterranean through to eastern India. In the Middle East, particularly Iran, Syrian rue has been considered sacred since pre-Islamic times and has served a wide variety of purposes. Peganum harmala is believed to purify both the mind and the air. In Turkey, dried Syrian rue plants are hung as protection against the “evil eye”. Syrian rue seeds are also used to make a textile dye called Turkish Red. In Iran, peganum harmala seeds have long been used for smudging as part of the incense they call “espaend”. The plant and Syrian rue seeds have also been used medicinally and as a spice. In high doses, Syrian rue has been used to induce abortion. Despite its purported medicinal uses, Syrian rue seeds can be extremely dangerous to ingest without proper knowledge because they contain MAOI’s that can prevent the breakdown of toxic substances, rendering certain foods and medicines toxic. The peganum harmala plant was reportedly introduced into the U.S. in 1935 after a traveler, fascinated by the seeds he found on a trip to Europe, took them home and planted them in New Mexico. Peganum harmala seeds escaped cultivation and can now be found growing wild in several western states. The Syrian rue plant rarely grows above one meter, eventually blooming five-petaled white flowers that give way to partitioned seed capsules containing numerous seeds. Syrian rue seeds can be harvested by allowing the capsules to dry and harden in the sun.

Growing Information: Syrian rue prefers dry sandy soil with an alkaline PH. A mixture of half sand and half soil is ideal. Adding lime can also help make the PH more alkaline. A cactus potting soil will also work well. Sow the Syrian rue seeds just under the surface of the soil and mist lightly. Syrian rue seedlings are prone to damping off, so make sure to limit your watering. Some growers will choose to cover the soil with clear plastic until germination begins. Others will leave it exposed to the open air. Syrian rue prefers warm temperatures for germination, so bottom heat is beneficial. Fluorescent light works well for starting seeds. Although a warm sunny window can also suffice. Outdoors, keep your plants out of direct sun for the first year. Seeds sown outdoors are best off being started in mid-summer. Sow just below the surface of a loose, sandy soil. The plants are sensitive to transplanting, but it can be managed if you do not disturb the roots. 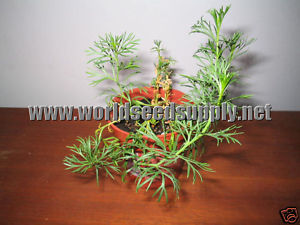