The Poblano pepper, sent to the rest of the world from Puebla, Mexico, is one of the most popular hot peppers, especially in Mexican cuisine.  Poblanos are most often fried, stuff or used in mole sauces.  The poblano is the key ingredient of popular Mexican dishes such as chile relleno and chiles an nogada.  The Poblano is actually the same pepper as the Ancho, although it is only called that once it has been dried.   The dried peppers, Anchos, are the most popular dried chili in Mexican cooking.  They are frequently powdered and used in red chili and tamales.  Poblanos start out a very dark green, turning red with age over their very long growing cycle, which can be as much as 200 days.  But most often, Poblanos are harvested after about 65 days while they are still green.  The redder color of the mature Poblano can be taken as an indicator of increasing heat.  The heat range of Poblanos can vary widely and is often unpredictable.  But they are generally considered to be medium to mild.  These are a must-have for all pepper lovers. 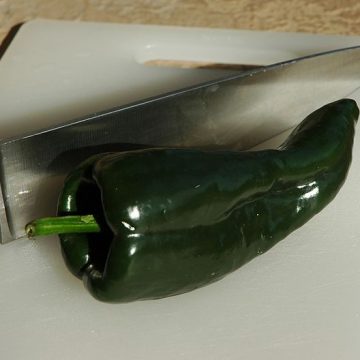