Hot peppers are actually members of the nightshade family. Hot peppers have long been used as a spice in a variety of ethnic cuisines and are considered to have medicinal properties. Capsaicin, the active principle, releases endorphins that can relieve pain and itching and can be used to “burn” out a cold. It is also used for sore throat, circulatory problems, and problems in the GI tract. It can, however, cause other stomach problems if consumed in excess.

The Peperoncini is probably the most common pickling pepper there is. These peppers are particularly common in Italian and Greek cuisine, especially in salads and antipastos. This heirloom variety is from Southern Italy. These wrinkled peppers are usually picked and pickled while they are still green, but they will eventually turn red if left to mature (75 days). The peperoncini has a mild heat with a tone of bitterness. A small jar of peperoncinis can cost around $7. You can easily grow pounds yourself with the plants from a single packet. 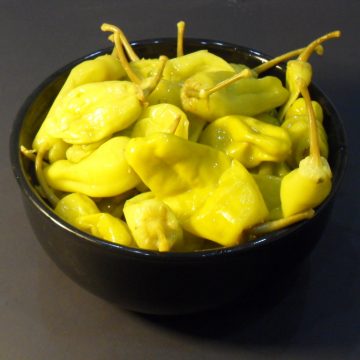