Albizia Julibrissin is known by a variety of names like Mimosa, Silky Acacia, Persian Silk Tree, Pink Siris, Powderpuff Tree, and just plain Silk Tree. This plant is a beautiful ornamental native in southern to eastern Asia. In the mid-18th century the plant was introduced into European culture by an Italian nobleman named Filippo del Albizzi thus earning it its name and also accounting for the fact that it’s sometimes spelled Albizzia Julibrissin. It was reportedly introduced into the U.S around 1745 where it was continued to be cultivated for its main use as an ornamental. This deciduous tree is mostly used as a landscaping accent that actually does well in areas where the soil is either alkaline or poor due to its ability to fix nitrogen. It is most noted for its very fragrant and showy flowers. The seeds are also widely known for their viability that tends to last for many years.

Albizia Julibrissin is perennial and fares best in sub-tropical zones. Best characterized by its tripinnate leaves and gorgeous flowers this plant also has a sturdy dark greenish and grey bark the appears to stripe vertically as it ages. It can grow to be 35 feet tall once it reaches maturity which is considered to occur rapidly among its species. It also attracts hummingbirds most notably during summer when its flowers have their long flowering period. The young leaves can be cooked to be used as an aromatic potherb. The flowers cooked can also be eaten as a vegetable and the dried leaves of a mature plant make a great tea substitute. This plant has been known to have many medicinal uses. Among them, the flowers make a good sedative and reportedly can also help with irritability, breathlessness, and poor memory when ingested. The flowers must be dried beforehand. It has also been applied externally to injuries and swelling in ancient Chinese medicine.

Growing Information: Albizzia seeds should be germinated using The Hot Water Tek https://www.worldseedsupply.com/germinating-hard-shelled-seeds-such-as-mimosa-acacia-and-bundleflower-the-hot-water-technique/ Sow in very well lite area outside shortly thereafter about half a foot apart. Seeds should be sowed in average, medium, or well-drained soils. Can also be started indoors in a regular, well draining potting soil. Must be kept in areas where they can receive a lot of sun light. Try to give some protection for the first winter outdoors. 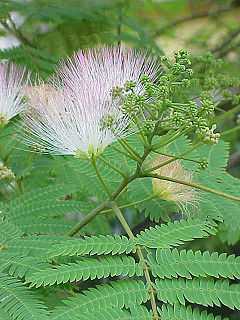