Also known as Illinois Bundle flower or Prairie Mimosa, Desmanthus Illinoensis is a perennial member of the mimosa family that is native to Illinios but which has spread to much of the United States. It is the most widely distributed species of Desmanthus, measuring up to three feet with attractive fernlike leaves that close up at night or occasionally during intensely hot weather. This specie’s subtle white flowers form early in the growing season and are replaced by unique clustered seed pods, which are responsible for the name “bundleflower”. The pods are abundant producers that easily reseed the ground for the following season. Also, unlike tropical mimosas, bundleflower is not frost tender. It is also beneficial in that it releases nitrogen-fixing bacteria into the soil as part of a symbiotic relationship that can benefit surrounding plants as well. The roots are also reportedly used as an insecticide, and its seeds are rich in protein. As a result, it is often planted in pastures to feed cattle.. 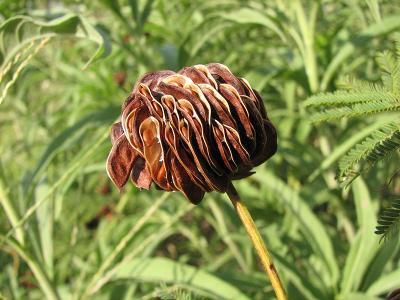