Argemone Mexicana is perhaps the most well-known of the Argemone genus, the species of which are generally regarded as prickly poppies. Argemone mexicana is an annual flower measuring up to three feet. It is grown as an ornamental valued for its ornate spines that cover the stem and attractive white-veined, blue-green leaves. Yellow flowers will bloom in late summer and be replaced by spiky seed pods that will eventually burst and reseed the plant. In some cases, the plant has been known to survive more than one season. Native to Mexico, it has been naturalized in the United States and parts of Europe. It also grows in India where it is considered a valuable herb in Ayurvedic medicine. The sap of the plant is sometimes used medicinally as a sedative and an analgesic among other things. The oil from the seeds is used as a purgative but is generally considered toxic.

Growing Information: These seeds are easily grown outdoors in full sun by scattering the seeds on the surface of the soil and pressing them in. Sow the seeds in early spring or in the fall where temperatures are warmer. Transplanting is not recommended unless it can be done carefully without disturbing the roots. A light, well-draining soil is preferred, although other soils will work. A. Polyanthemos is drought-tolerant. Seeds typically take 3-4 weeks to germinate. 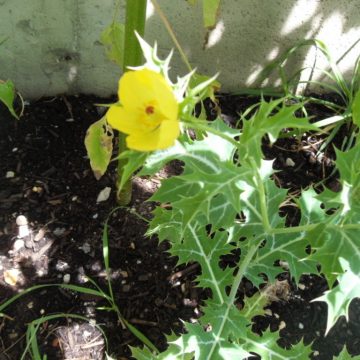