Urtica Urens is a close relative of the more well-known stinging nettle, urtica dioica. Urtica urens, also known as dwarf nettle or annual nettle, is actually more effective at stinging because it has more stingers in a given space. Urens may therefore, work better for certain medicinal applications. The stems of these two species are covered with tiny hairs, many of them capable of injecting a chemical mixture. The chemical concoction in dioica has been reported to conatin a mixture of serotonin, acetylcholine and formic acid. It is uncertain if the same mixture exists in urens, but the action is very much alike. Most would consider the sting tolerable, although possibly quite a nuisance if inflicted unexpectedly. To some, it may even be considered a sort of novelty entertainment. Yet, there are some east Indian species of urtica known to cause excessive stings and even death. Both urtica urens and dioica can be found growing in North America, Australia, Europe and many other parts of the world. Typically standing about a foot in height, urens is shorter and has smaller leaves than urtica dioica. Aside from the sting, nettle is actually used for food and an array of medicinal purposes. The chemicals in the plant are neutralized by drying or cooking, and they can even be soaked in water to make handling easier. Its medicinal uses are especially applied to reducing allergies, rashes, eczema, chicken pox, burns and insect bites. It is also used by those with congestive heart failure, high blood pressure, gout, rheumatism, anemia, asthma, hay fever, kidney problems and especially those with arthritis and joint problems. It is reportedly a diuretic, blood sugar regulator and an astringent. Additionally, it may work to stop bleeding.

Growing Information: Nettle seeds require light to germinate. Choose a permanent location that is somewhat isolated because nettles can spread rather easily. Your soil should be rich, moist and in partial shade to full sun. The seeds may be started indoors and transplanted or sown directly outdoors. If using small packets, it may be best to transplant. Sow the seeds on the surface of the soil and pat down very lightly. An equal final spacing of about 12” around is suitable for great growth. Harvest the plant down to the base in May to June before flowering begins. Gloves are needed when handling. 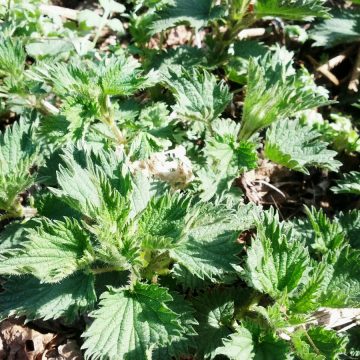