This is the Rapa Nui or Easter Island strain of nicotiana rustica. It was originally collected in Easter Island, the Chilean island that was home to the Rapa Nui culture that built the iconic Easter Island Statues. The original inhabitants are believed to have arrived from Polynesia. The nearly 1000 statues were carved from pure volcanic stone, with the largest measuring up to 30 feet in height and weighing as much as 80 tons a piece. What is even more amazing is that these massive sculptures were moved across the island in a period between 1400 and 1650 AD, long before the invention of any kind of machinery. It is believed they “walked” the stones by alternating the weight of the stone on the right and left edges while advancing the opposing side forward one “step” at a time.

Nicotiana rustica is a member of the solonaceae family along with datura, nightshade, potatoes and tomatoes. It typically grows to about 4 feet, forming sticky leaves and yellow flower clusters. It has the highest levels of nicotine of any tobacco species, potentially containing up to twenty times more then nicotiana tabacum, the species used in commercial cigarettes. At such levels,  caution is advised when smoking nicotiana rustica  because of the risk of fatal overdose. However, Aztecs and other Native Americans who considered this plant to be sacred would indulge in smoking  nicotiana rustica to achieve mind alteration primarily for ceremonial purposes and occasionally for recreation. Rustica can have a smuch as 9 times the nicotine of nicotiana tabacum. You can see a picture of handmade cigars composed of cured nicotiana rustica leaves.  Nicotiana rustica was also ingested by chewing, snuffing or as an enema. Additionally, it was used to treat bruises, sprains, infected wounds and to treat baldness. Today it is grown as an ornamental and also used as an insecticide against infestations of aphids, spider mites and other tiny pests. WE CARRY OVER 20 TYPES OF TOBACCO SEED !! 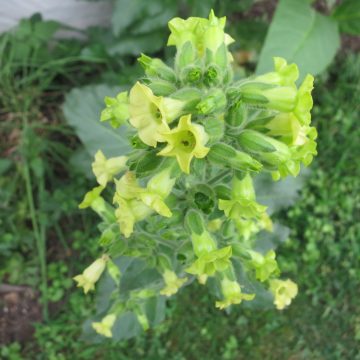