Piper Methysticum is a relative of black pepper and the betel plant, which grows on several South Pacific islands. The plant has a “deep-rooted” tradition as a social drink amongst natives of the region. Known as kava or grog, a cold-pressed brew of the pulverized root is served in wooden bowls during various ceremonies. The roots may also be chewed, producing a numbing sensation on the mouth. There are various strains and types of kava, which vary in potency. In Vanuatu, there are restrictions on what types of kava can be exported. Anything too weak or too strong is prohibited from being exported. Today, kava is found in a variety of forms including powdered root, whole root, pulverized root, powdered extract and paste. Each variety and form can differ greatly in effectiveness. The active ingredients in kava are called kavalactones. Kava has shown evidence of having sedative properties. Kava is said to be a very effective anxiety remedy, and it has been reported to stop panic attacks in their tracks for some users. It is also used by many as a sleep aid by calming the mind and body. Recent research has also been conducted that indicated that kava may have anti-cancer potential. Kava use has been linked to instances of liver disease. But the reports prompted research which later revealed that the hepatoxic components of kava were limited to the leaves and upper stems. Studies on the roots showed them to be free of these same components. The problem seemed to have originated when supplement companies, in an effort to increase profits, adulterated their kava root with other parts of the plant that were not traditionally part of kava consumption. Since then, those practices, which threatened the entire kava industry, have ceased. Certain individuals may experience allergies to kava. Chronic use is discouraged. We offer live starter-sized kava plants.

Kava Plants are here! This is the “Isa” variety. Reports indicate that is is one of the more easily-grown kava strains, but it is also quite strong. It is often considered too strong for ceremonial use, and is generally reserved for medicinal use indigenously. But kava plants grown outside their native habitat or younger roots may also fail to reach the same level of kavalactones.

2.Pick your pot. Picking a tall flexible medium sized pot works best make sure it has very good draining holes. Side and bottom holes would be best.

3.Making your humidity dome. First take an empty 2-liter soda bottle and cut the bottom off as low as you can so that you still have a nice circular edge.

4.Transplanting. Take you bare rooted cutting and place in to soil mix until the cutting node is fully covered and lightly press down around the base of the cutting. Water then place humidity dome directly over the center of the plant.

5.Watering. Water your rooted cutting once to twice a day make sure to water until water drains from the bottom of the pot.

6. Acclimating. Slowly introduce the cutting to your home conditions. After the first week take off the bottle top. Wait another week or so and remove the humidity dome. after a few days you can introduce to the open air outside.

Kava likes partial sun so a shaded area with direct morning sun is best 70f to 90f with high humidity 60% to 100% are the optimal conditions. *DO NOT TRANSPLANT KAVA IN TO BIGGER POTS UNLESS THE ROOT SYSTEM HAS FILLED AT LEAST 80% OF THE INSIDE OF THE POT OR RISK MAJOR ROOT DAMAGE!

We ship live plants on Mondays and Tuesdays only, so please allow at least 1 week for shipping. SORRY, NO INTERNATIONAL SHIPPING ON LIVE PLANTS 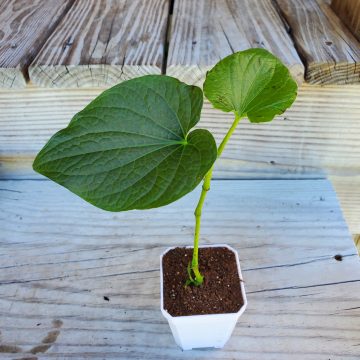