Lophophora Fricii is a rare globular cactus that was first collected in 1931. It grows around Viesca in Coahuila, Mexico and may possibly be referred to as lophophora sp. var Viesca. Lophophora fricii is often classified as an independent species, although some see it as a subspecies of l. diffusa. But classification as an independent species does seem appropriate when you consider that fricii does not accept the pollen of any other species. The seeds of the two species are very similar, although flower color tends to differ. Native populations tend to exist in very separate areas as well. Fricii is typically characterized as having a grayish skin with red to dark pink flowers. However, there is a white-flowered version of the species as well. Fricii typically grows large heads with variable rib structures and does not clump much. As a result of such a variable rib structure, this species can take on a range of different appearances, even within the same patch. Lophohora fricii, like difussa, is not self fertile. Since l. fricii is naturally a slow grower, most hobbyists prefer to graft fricii seedlings to pereskiopsis spathulata so that they can raise full-sized specimens in only a fraction of the time. Specimens grown out naturally on their own roots, however, can command very high prices due to the time they take to mature.

SORRY no sales to California or where prohibited 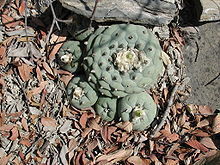