The Chocolate Reaper is in the lineage of the Carolina Reaper and packs the same mouth-scorching heat. The “chocolate” in the name simply refers to the brown color. But do not let the color deceive you. After all, brown is the color of burnt, which is what your tongue will be like when it encounters the Chocolate Reaper!

The Carolina Reaper was rated the hottest pepper on earth on August 7th of 2013 after extensive testing done at Winthrop University over the previous two years.  This devilishly hot pepper was originally known as HP22BNH7, and it was the result of 32 years of planning by Ed Currie who set out on this goal after a discussion in his college dorm room in 1981.  Many people still associate the Ghost Pepper as being the hottest pepper in the world when in reality there are several hotter peppers, including the Trinidad Scorpion Moruga, Trinidad Scorpion ‘Butch T’, the Infinity Pepper and the Naga Viper.  The mean average Scoville heat rating for the Carolina Reaper pepper is 1,569,300. This compares to a peak rating of 1,041,427 Scoville units for the Ghost pepper. The Carolina Reaper can peak at more than double this number, coming in at over 2,200,000 SHU.  So ultimately, even the weakest Carolina Reaper pepper is hotter than the best Ghost pepper. The Carolina Reaper has an intensity that is more comparable to pepper spray, which increases over the first eight minutes following contact.  The inside of dried Carolina Reaper peppers are known to have globs of dark red pepper oil that resemble pure chili extract.  The Carolina Reaper makes the habanero look like a jalapeno, and even those who have tried the ghost pepper realize they are in a different league when it comes to the hottest pepper in the world.  But what seems to make the Carolina reaper a true element of torture is that the pain persists fully for as much as an hour. There is no tapping out from this one. Even milk does little to sooth the burn. Your gums will burn with the rest of your mouth. But you will be able to look back proudly and say that you’ve eaten the hottest pepper in the world….until the next record is set.  World Seed Supply is proud to offer these genuine Carolina Reaper seeds as part of our collection of extremely hot pepper seeds. Please refer to our pepper growing guide at the bottom link for Carolina Reaper cultivation tips.

Check out this video of one man’s agonizing experience: https://www.youtube.com/watch?v=RUsHEd53Fso

WARNING: Direct consumption of these peppers can be dangerous. Even handling the seeds can cause irritation. 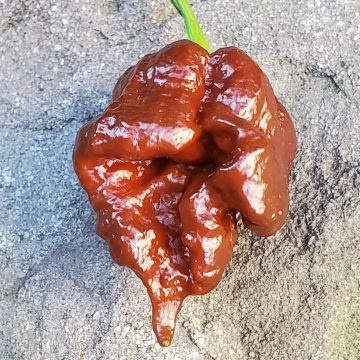