Agrimony, a yellow-flowered perennial belonging to the rose family, has been used since ancient times as a medicinal herb. This adaptable species can be grown everywhere in the United States. The entire plant is valued for its herbal properties and because it yields a yellow dye. Agrimony is believed to work for ailments such as insomnia, insect bites, sore throat, diabetes, diarrhea, colitis and male impotence. Considered to also have diuretic properties, agrimony has the ability to cleanse the body. It has been used as and herbal remedy for diseases of the liver, kidneys, bladder and gall bladder. Agrimony has long been used in dream pillows. Folklore depicted agrimony’s sleep-inducing capabilities as being somewhat magical. It was believed that simply holding the herb over one’s head would be cause for immediate sleep. This “spell”, as it was believed, could be immediately reversed by removing the herbs. Oddly enough, agrimony has also been used to ward off witchcraft. Agrimony seems to work in a variety of fashions to treat injuries. First of all, it is a mild astringent. Agrimony is said to be anti-inflammatory and analgesic, and so it has been used for a lot of relative ailments such as sore throat, bruises, arthritis and rheumatism. The leaves also seem to have coagulant properties and have been used to control bleeding. Agrimony also reportedly helps lower blood sugar and has been for several different digestive problems. HERB ALSO AVAILABLE!

Growing information: Agrimony will tolerate most soils, even dry alkaline soils. Soak the seeds for 12-24 hours. Many growers prefer to cold stratify the seeds for several weeks prior to planting. This process, which involves putting the soaked seeds in a bag of damp spaghnum moss or sand and then keeping in the fridge, is designed to simulate winter. The temperature fluctuation can help induce germination. You can also sow seeds outdoors in the fall to simulate this process. Agrimony can grow in full sun to partial shade. The flowers can be harvested and dried as the plant blooms in summer. In purchasing, international buyers agree to assume the risk of arrival of all items. We cannot replace lost or seized items. You will be required to confirm that you agree to these terms before items can be sent. 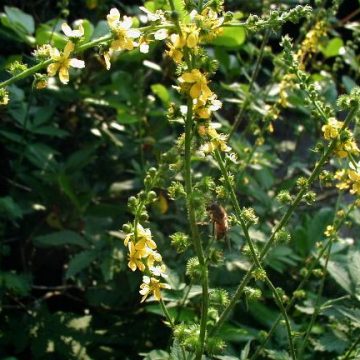