Henbane is an annual to biennial with distinguishing hairy, toothed leaves and greenish to yellowish flowers with dark purple veins that almost appear black. Originally from Eurasia, it is now found throughout the world and is most commonly grown as an ornamental or landscaping plant. Henbane, like several other nightshades, has a long history of use as a medicinal and a poison, and it is still grown commercially for medicinal use in some parts of the world. Like its cousins, belladonna and datura, henbane was a common ingredient in witches brews. Containing the toxic alkaloids hyoscyamine and scopolamine, henbane was used as a poison at least since the Middle Ages. This type of poisoning, which can take place even after ingesting a small amount of plant or seed matter, can have symptoms such as increased salivation, headache, nausea, convulsions, hallucinations, stupor, coma and death. Ironically, henbane was once used as a flavoring in German pilsner beers until the German government stepped in and banned it as an ingredient. Henbane use has also been documented in a variety of other cultures including the Arabs, Ancient Greeks and in Tibetan medicine. It was also used as an admixture to the hallucinogenic brews of certain South American Indians. As a medicinal, it has mild pain relieving abilities, antispasmodic activity and causes pupil dilation. Based on such actions, it has been reportedly used for a list of conditions including toothaches, epilepsy, cough, asthma, and Parkinson’s Disease. One source also reports that placing the dried leaves around a house will help drive away mice.

WARNING: ALL PARTS OF THE PLANT, INCLUDING THE SEEDS, ARE VERY POISONOUS. DO NOT INGEST. KEEP AWAY FROM CHILDREN OR PETS.

Growing Information: Like those of many other nightshades, Black Henbane seeds have germination inhibitors in its seeds to make sure that all the seeds do not germinate at once in the event that unfavorable conditions should arise afterwards. Seeds should be cold stratified in the fridge for two weeks before sowing. Soaking them in water that is changed regularly during this period will help leach off the germination inhibitors. As an alternative, they may be placed in a moist paper towel in a zipper baggie while in the fridge. If sowing outdoors, sowing in December will provide a natural cold stratification. Pretreatment with gibberellic acid will also improve and even out germination if available. 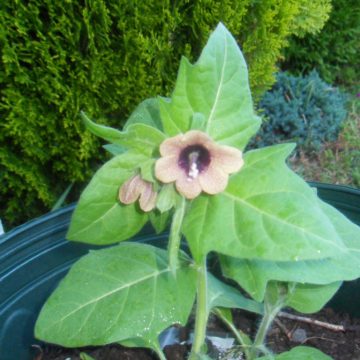