Imphepho is an herb with both ritualistic and medicinal uses in Africa, where it grows.  Imphepho is rich in oils and flavanoids that likely contribute to its various special properties. The name imphepho refers to a number of African species in the genus, helichrysum.  Many of these have generally the same effect as each other and can be used interchangeably as an herb.  Although it is often mentioned that the Amazon Rainforest still has many plants yet to be discovered, there seem to be just as many African herbs that we are still discovering.  Aside from just those that have never been researched, even the traditional herbs of that continent are perhaps the least well-known of all.   Little-known to western culture, imphepho is more proof that Africa still holds an array of special plants that we have not yet even begun to explore.

Imphepho is valued by traditional medicine men in Africa who use it as a smudging herb to communicate with ancestors and calm evil spirits. Imphepho is believed to help repel negative energy, and it does the same for insects.  Breathing the smoke over time can have a sedating effect, which might actually offer assistance when a shaman enters a trancelike state to perform his work.  This is much like the way frankincense is used in Christian practice. Many people do not realize that frankincense too, has sedative properties.  Some theorize that the breathing of frankincense has contributed to some of the heightened religious experiences Christians have reported.  There are other historical cases of incense plants working this way as well, and in fact, these types of experiences also seem to explain why certain plants or their resins have been chosen to be paired with spiritual practice.

Some people say imphepho is a good herb for those suffering from anxiety or who need help getting to bed. It has even been used as bed stuffing in Africa.  Imphepho also appears to have oneirogenic acivity, meaning the herb assists with lucid dreaming, dream activity and dream recall. This is similar to other African herbs such as silene capensis and entada rheedii.

Imphepho also has a lot of traditional medicinal uses, especially as a topical dressing to wounds. Sometimes the ashes of the burnt plant are used, which creates new chemicals that have additional benefits.  Using imphepho topically makes sense if it is true that imphepho has antiseptic, anti-viral, anti-fungal, anti-microbial, anti-inflammatory and pain relieving properties. It can also be used to make an anti-septic cream. More often, Imphepho is taken as a tea or a smoke for all sorts of pain or sickness.  The herb is taken in Africa as a remedy for menstrual cramps, headaches, coughs, cold and flu. Where western medicine is limited, imphepho is also used for more serious diseases such as tuberculosis, herpes and HIV.  Its anti-viral properties have yet to undergo any significant research, but imphepho could also open up new avenues for Western medicine too as we begin to notice the natural value that region of the world has to offer. 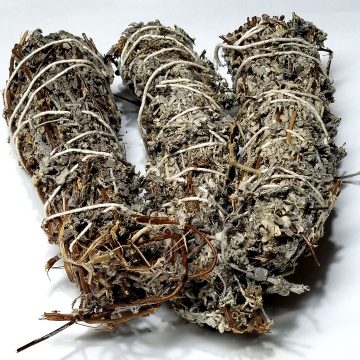