Glycyrrhiza glabra is a traditional medicinal herb and flavoring plant known as licorice. Licorice contains the chemical, glycyrrhizin. Licorice is in the legume family and is most widely known for its use as a flavoring for candy. In fact, when most people hear the word licorice, they think of the candy (black licorice) rather than the plant itself. It is the root of the licorice plant that is used to flavor black licorice sticks and other candies.

Licorice has a similar taste and similar chemicals to fennel, anise and star anise; but it not related. As a legume, the glycyrrhiza glabra and lepidota both have the ability to improve the soil they are planted in because they form a symbiotic relationship with bacteria that “fix” or draw nitrogen from the air and convert it to ammonia in the soil. Therefore, planting licorice in your garden may improve the health of your other plants.

In addition to candy, licorice is used to flavor liquors and tobacco too. But the role of licorice as a flavoring should not overshadow its numerous uses as a natural remedy. The Native Americans used glycyrrhiza lepidota as a natural remedy just as Europeans used glycyrrhiza glabra. Some classify licorice as an adaptogen, a class which refers to substances that have an overall benefit to the mental and physical performance of the body. Since the roots themselves are not widely sold, one would probably have to grow their own be able to use it. Fresh roots of licorice have been chewed to freshen breath. Licorice has also been used in cases of colds, sore throat, cough and flu. Some arthritis patients have looked to licorice for anti-inflammatory properties while other people have looked to it for help with gastritis, constipation and ulcers. In Chinese herbal practice, licorice is consider to be a detoxifier. Some reports have suggested that licorice could have a protective effect on the liver, although high levels are known to be toxic. The Japanese seem to have acknowledged that licorice has anti-viral properties because they are reportedly using glycyrrhiza glabra to treat chronic viral hepatitis. From this, it seems licorice has been used in quite a number of different ways…and there are others. So it seems ironic that most people know licorice for nothing other than a flavoring.

Growing Information: American licorice plants can grow to be about 3-4 feet in height. For best results, the seeds should be scarified and then soaked prior to planting. To scarify, file down the outer seed coat so water can penetrate. Soak the scarified licorice seeds in warm water for 24 hours prior to planting. Use a loose, well-draining soil with good fertility. Since licorice is a root crop, it is important to prepare your soil deeply. Plant your licorice seeds at a depth of 1/8” and keep moist but not wet. Since wild licorice seeds still have their wild characteristics, it is normal for them to have stubborn and irregular germination. But you may begin seeing sprouts in as little as 1-2 weeks with new ones popping up sporadically. Mature glycyrrhiza plants enjoy full sun and are reportedly hardy down to zone 3a. Depending on location, some growers choose to keep licorice plants in a greenhouse for the first winter. To promote good root growth, it is recommended to keep the plant from flowering by topping it off. Harvesting begins in the fall after 3-4 years. The plants can be multiplied by dividing the roots in the spring or fall. 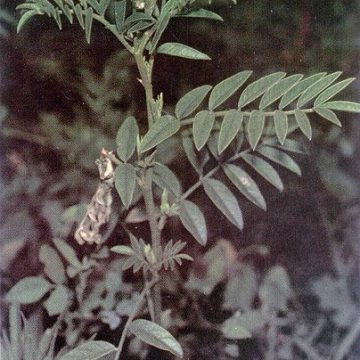