Myrrh is a reddish-brown resin obtained from small trees (usually under 9 feet in height) that belong to the Burseraceae family. Most of the myrrh today is produced on the southern Arabian Peninsula and the quality of the myrrh can be determined by the richness of its color and its degree of stickiness to the touch. It is typically used as a type of incense and when it burns it actually expands instead of melting. It gives off a strong resinous scent that is both pungent and bitter.

Myrrh was popular in ancient times and was used for many different purposes. In ancient times it was used as a key ingredient in the making of perfumes and incense. It was greatly used by the Ancient Egyptians who imported myrrh to embalm the dead, to use in fumigations and to be burned for religious purposes. In Ancient Rome, myrrh was extremely popular and was burned during funerals to mask the smell of the dead, was used an ingredient in wine and perfume and was also used for fumigations like that of the Ancient Egyptians. Perhaps one of myrrh’s most famous references is as an ingredient in holy anointing oil mentioned in the Bible and of course as one of the gifts presented to the infant Jesus in the New Testament story where the three Wise Men each present Him a gift. Myrrh is also used in traditional Chinese medicine to treat a myriad of things including rheumatic, arthritic and circulatory problems, toothaches, and bruises and was thought to have “blood moving: properties. Currently myrrh is used in mouthwashes and toothpaste as a type of antiseptic and also as an ingredient in creams that treat cuts or scrapes on the skin.  Appearance may vary between batches. 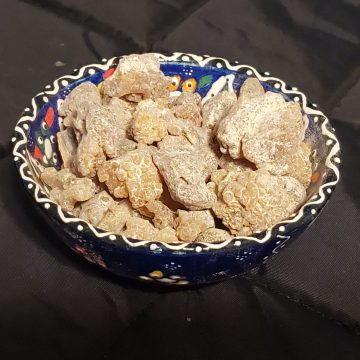