Copal is a type of resin produced from plant sap, often from members of the genuses copaifera, bursera and hymenaea.  Black copal, known as Copal Negro or Mayan Copal is significantly rarer than white copal with a piny aroma similar to incensio. It almost resembles volcanic rock. The term, “copal” is particularly identified with the aromatic tree resins used by the cultures of pre-Columbian Mesoamerica who burned it in ceremonies as a spiritual incense to clear out negative vibes, or in other words “evil spirits”. It has also been used to promote spirituality. It is used in both formal ceremony as well as prior to meditation. Both black and white copal are used for these purposes. The word copal is derived for the Nahuatl language word copali which translates into ‘incense’. We offer nice black copal chunks imported from Peru. Some of these chunks are huge! 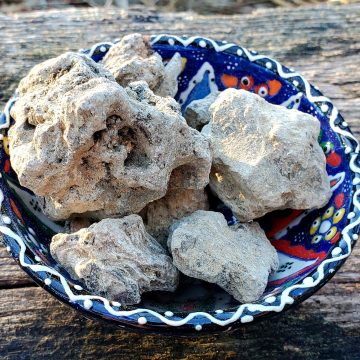