Rose hips are small red or orange fruits resembling berries which are left behind on the rose bush when the flower dies. They are rich in vitamin C, along with vitamins D and E and have antioxidant properties. During World War II, Rose Hips were harvested and used in Great Britain to make syrup rich in vitamin C for children, as import of citrus fruit was scarce due to German submarines sinking commercial ships bringing food and supplies. Rose hips can be put to culinary use to make preserves, jam, syrups, pies, bread and beverages such as herbal tea. Rose hips also have medicinal purposes which have been recorded since Roman and medieval times. They have anti-inflammatory properties which serve to treat Osteoarthritis and also contain phytochemicals which help to prevent cancer and cardiovascular diseases. Rose hips should be harvested after the first frost in the autumn of the year and should not be ingested if treated with pesticides. These are whole rosehips including the seeds. ALSO OFFERING ROSEHIP POWDER AND SEEDS! 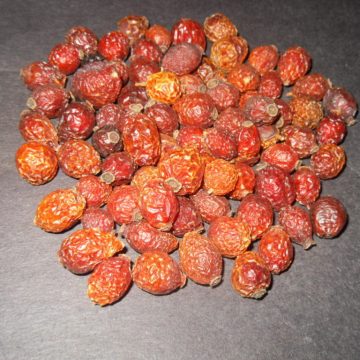