Patchouli is a member of the mint family found growing in Southeast Asia. The name patchouli also refers to the oil of the patchouli plant. There are several species of the pogostemon genus whose oil is used to make patchouli oil, but the two primary species used are pogostemon cablin and pogostemon heyneanus. Pogostemon heyneanus is commonly referred to as Java Patchouli or Indian Patchouli. Of the two, pogostemon cablin is the more aromatic. But Java Patchouli is more common to find in cultivation. Patchouli has been used for centuries and was even used during the silk trade to keep moths from laying their eggs in clothing. But it became considerably more popular during the Hippy movement. The uniquely pungent smell of patchouli also met a convenient use by Deadheads who realized it could help mask the scent of marijuana. Even today, hippies, among others, use patchouli as a perfume, an aromatherapy oil and a hair conditioner for dreadlocks. Aside from these uses, patchouli is an insect repellent. It has been used medicinally for common ailments such as colds, headaches, diarrhea, abdominal pain and nausea. It can help with skin care, including conditions such as acne, scars, eczema and wrinkles. We offer seeds of pogostemon cablin as well.

Growing Information: Sow your seeds on the surface of moist, rich soil. A seed starter soil mix is ideal. Patchouli likes warm temperatures and high humidity, but it does not like bright light. It can sunburn easily. Keep well-watered. Flowering can be heavily reliant on the photo period. Complete darkness during the nighttime phase during flowering is recommended. Once mature plants are obtained, new plants can be produced by rooting cuttings in water. 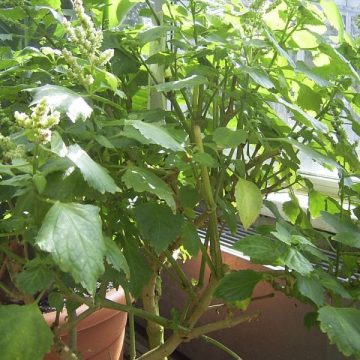