The Baobab Tree is the national tree of Madagascar. This icon grows around the equator, primarily in the savannahs of Africa and India. Living specimens of this symbolic tree date back thousands of years. The Big Baobab has shown through carbon dating to be around 6000 years old, which means that it predates man-made structures such as The Great Wall of China, The Pyramids at Giza and The Maltese Temples. And with that age comes size. Baobab Trees are known for some of the largest trees in the world. The largest, Sunland? Baobab, is 72 feet in height and 154 feet in circumference. If numbers fail to give you an accurate picture, then just consider that there is now a pub and wine cellar built into the hollows of the trunk. Nicknamed the Upside-down Tree, The Baobab Tree is rooted in folklore about how it came to be grown upside-down. The tree is not actually grown upside-down, but it appears that way because it remains leafless for much of the year. Without leaves, the tree’s network of branches resembles roots sticking up into the air. Baobab has large 6″ white flowers that resemble those of hibiscus. The flowers are pollinated by bats, and the branches are a common location for African honeybees to build their nests. The edible fruit of the Baobab tree is considered a superfood that is high in antioxidants, calcium, iron, fiber and vitamins. Fruits can be up to a foot long and contain seeds that are also edible. Dried Baobab fruit products are sold around the world as a dietary supplement, and young sprouts can be eaten like asparagus. Even the leaves can be eaten like spinach. The bark is also used for it fiber, but the tree is capable of growing new bark to avoid dying. It is declared a protected tree in South Africa under the Forest Act of 1941. Baobab trees are relatively rare in cultivation, but they can be grown indoors and make great bonsai plants.

Growing Information: Baobab seeds should be soaked in hot water for a 24-hour period prior to sowing. Some growers will also nick out a small snippet on the side of the seed prior to soaking. Baobab seeds prefer a well-draining seedling mixture with about 1/3 sand. Baobab trees are good for greenhouse growing and can be planted outside in the spring and summer. Plant your seeds about an inch deep and monitor them for fungal growth. Only water when the soil is barely moist at all. It may be a good idea to pre-treat with a fungicide or use chamomile tea to water them. Chamomile is a natural anti-fungal that should not harm your seedlings. Maintain warm temperatures during germination. Keep in mind that this plant naturally grows around the equator, and temperature can make a significant difference in your success. A soil temperature of about 85-90 degrees Fahrenheit will be ideal. Young Baobab trees can be grown in containers and may even be grown as houseplants, especially for bonsai. Take care to prevent your plants from freezing because it will kill them. Even at the correct temperatures, Baobab seeds can take up to seven weeks to germinate. 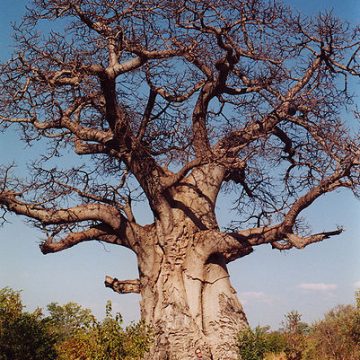