Passiflora Quadrangularis is native to Central and South America, but it is now widely cultivated throughout the Americas for its fruit. The large, edible fruits are green to yellow and measure over a foot. The flowers are said to resemble those of passiflora alata. Quadrangularis is a vigorous grower with thick stems that can reportedly grow as much as 50 feet in a season. The name quadrangularis derives from the fact that the stems are quadrangular. In addition to the fruits, which are eaten raw or made into foods and beverages, the roots of old plants are edible. They have reportedly been used as substitutes for yams. The flowers reportedly contain small amounts of MAOI’s which can interact with certain foods and medications.

Growing Information: Plant your seeds at a depth of 3/4″. Your soil temperature should be between 70-80 degrees Fahrenheit or germination will take significantly longer. Keep your soil lightly moist. This species likes bright light and high humidity. It also requires good drainage. It will grow in a wide variety of soils, but avoid strongly alkaline soils. Avoid exposure to frost as well.

In purchasing, International buyers agree to assume the risk of arrival. We cannot replace lost or seized items. You will be required to confirm that you agree to these terms before items can be sent. 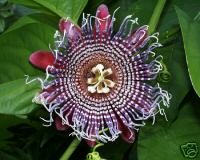