Papaver Setigerum, known as Poppy of Troy, is the poppy species most closely related to papaver somniferum. Native to the Mediterranean region, there is even speculation that somniferum evolved from setigerum. Most people would probably not know the difference between the two flowers. The two have even been intentionally crossed by some growers to form hybrid flowers. Setigerum resembles somniferum in just about all aspects except that it tends to grow more compactly. Typically growing 2-3 feet in height , setigerum has bright lavender flowers with dark purple, almost black, bands in the center. Its lettuce-like foliage resembles that of somniferum as well. Setigerum is used in dried floral arrangements, and the seeds can be used as breadseed just like those of somniferum. In fact, papaver setigerum is also referred to as Dwarf Breadseed Poppy. One of the perks of growing this species is that setigerum plants tend to send up numerous blooms during the season while many somniferum varieties will only send up a single bloom per plant. Setigerum can be grown as an annual flower in most locations.

In purchasing, International buyers agree to assume the risk of arrival. We cannot replace lost or seized items. You will be required to confirm that you agree to these terms before items can be sent. 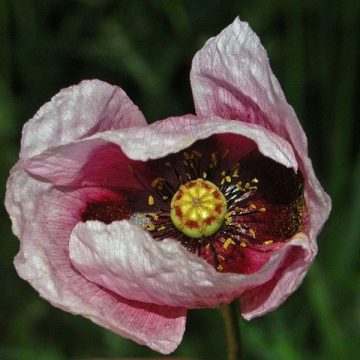