Mirabilis Multiflora is an endangered semi-succulent that is native to the southwestern United States.  In cultivation it is valued as an ornamental and a medicinal.  It is extremely drought-tolerant, being able to survive desert environments such as those of the Mojave and Chihuahuan. For this reason, it is known as desert four O’clock.  It also inhabits the dry, rocky elevated areas of Colorado, which has led to its other name.   It is a perennial in its native environment reaching two feet in height and four feet in diameter, forming a multi-flowered (multiflora) bush spotted with attractive magenta blooms.  Multiflora can be distinguished from its close relative, mirabilis jalapa, in that it has 2-5 flowers per calyx.  Multiflora can bloom within a single season with its musky-scented flowers returning each year from mid-summer to fall.  Navajo Indians reportedly used these flowers to make dye.  The leaves have reportedly been smoked for calming effects and the root has been chewed or taken as a powder to settle stomachs and relieve hunger.  Powdered root has been applied to reduce swelling as well. An anecdote also follows that the Hopi medicine men would chew the root in large quantities to induce visions that would lead to a diagnosis of their patients. 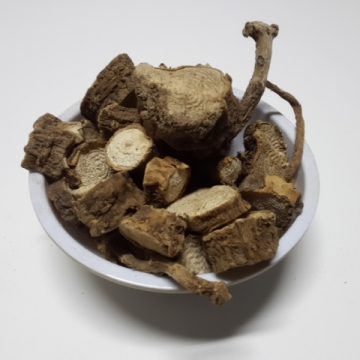