Ilex vomitoria is a South American evergreen species related to yerba mate’ (ilex paraguariensis) and Ilex guayusa.  Like these other two ilex species,vomitoria is used to brew a tea that contains significant levels of caffeine and theobromine.  Ilex vomitoria tea was used ritually and was referred to as, “Black Drink.  As one might imagine, this name was based on the dark color of the brew made from the roasted leaf and stems. Black drink, which was served from large shared vessels during rituals, earned the plant it’s species name, “vomitoria” because its consumption was associated with vomiting. Ironically, it appears not that yaupon tea is particularly nauseating, but that it was consumed in such vast quantities that it ultimately produced that effect.  It is possible that participants typically consumed the caffeine equivalent of anywhere from nine to eighteen cups of coffee during one of these ceremonies.  it is also likely that other plants were added tot he brew that increase its emetic effects.

Aside from it’s historical significance and potential as a tea plant, yaupon is an excellent landscaping plant.  Like other members of the holly family, ilex vomitoria has attractive glossy green foliage and red berries (on female plants). Unlike typical hollies, though, youpon does not have spiny leaves that can be painful to touch. Yaupon is an ideal choice for hedges, and its wood is valued for woodworking. This species has male and female plants, so both genders are required for fruiting. And despite coming from a tropical region, ilex vomitoria is hardy to zone 7, which means it can tolerate freezing temperatures.  World Seed Supply is extremely proud to be offering these rare seeds, although extreme patience is required for growing from seed.

Growing Information: Ilex seeds can take a very long time to sprout. Vomitoria, in particular, can take up to four years on some cases.  The seed coat is typically hard, which makes them somewhat impermeable to water. Ilex seeds are a lot like psychotria seeds. Nicking or filing the seed coat is recommended.  Some growers will also soak the seed in vinegar or a mild sulfuric acid solution can help wear down the seed coat. Clean the seed after that step to remove the acid, then soak in water for 24 hours. The seeds benefit from temperature fluctuation, so expose them to alternating 60-day increments beginning with hot (70-80 degrees), then cold (refrigerate), then back to hot.  The temperatures should be consistently above 68 degrees during the warm periods. This is essential for germination to be triggered. Yaupon likes coarse to medium soils and has low moisture requirements, so a 50/50 mix of perlite and loam is suitable. Bury the seeds at a depth of 1/4″ in pots for sowing and keep them in a shaded area. The seedlings are slow-growing and should be protected from freezing in their first year. You can put them in their final locations in early summer of their second year. 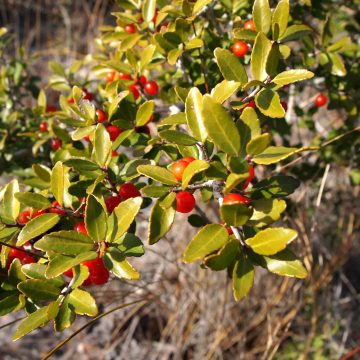