Cinnamon sticks are made from the dried inner bark of several tropical trees in the cinnamomum genus, including cinnamomum burmanii. This is the same genus as the camphor tree. When the bark dries, it curls into what we call cinnamon sticks. Cinnamon bark yields an aromatic volatile oil, which is used as a flavoring. Cinnamon is one of the most popular flavors in the world, found in everything from baked goods to toothpaste. Although well-known as a spice, many people do not realize that cinnamon is associated with various health benefits and herbal uses as well. And due to its agreeable taste, it is easily incorporated into most diets so that one can benefit from its herbal uses. But whole or freshly ground sticks should be used to gain the plant’s full benefits. Whole cinnamon sticks are most used as a decoction or a tea, which reportedly work well as a flu remedy. Cinnamon is used to invigorate the body by stimulating respiratory circulation. Naturally, it has been used to treat respiratory problems such as the common cols and bronchitis. Some also find that the increased breathing and blood flow results in aphrodisiac properties that can help counteract male impotence. Cinnamon has antispasmodic properties, which can help in cases of diarrhea and gas. It also aids in proper digestion and helps nausea. Cinnamon is also reportedly a diuretic, which can help cleanse the liver and kidneys. It can be applied externally for skin conditions such as eczema, psoriasis and rashes. It has also been used to treat rheumatism. Evidence shows that cinnamon was used in the embalming process by the Ancient Egyptians. This is probably because cinnamon has constituents that can destroy bacterial, fungal and parasitic infections. 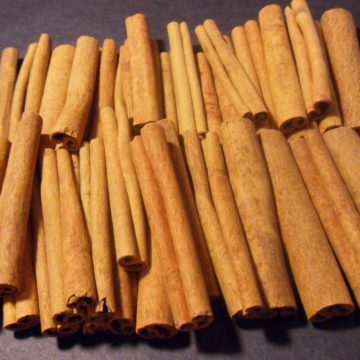