Calocedrus Decurrens is a large evergreen tree that is native to the west coast of the United States. It is the most popular of four species in its genus that are known as “incense cedar” for their aromatic wood. The leaves are used as a smudging herb to wash out negative energies and as a potpourri. They were burned Native American sweat lodge ceremonies too The steam from the boiled bark was also reportedly a traditional remedy for colds, and the wood is very prized as a building material because it is resistant to rot, lightweight, straight-grained and has a uniform texture. The wood is also used to make pencils. The tree itself grows to a height to 150 feet. It is grown as a drought-tolerant ornamental and is planted for erosion control. It is often called California White Cedar in contrast to the red cedar that can be found growing on the east coast of the United States.

Growing Information: The seeds will benefit from being cold stratified for 1-2 months at cold temperatures. This can be done by placing them in a moist medium in the fridge or by exposing them to natural cold temperatures in the fall. Afterwards, bury the tip of the seed with the wing facing up. It prefers a moist, well-draining fertile soil but it can tolerate a variety of different soil types. Once established, the trees can be planted in a final location in full sun to partial shade. It is beneficial to mulch around the base of the plant with pine needles, pine bark or sawdust. 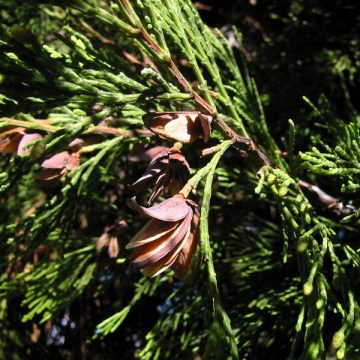