Ginkgo Biloba is a tree whose leaves increase circulation in the brain. It is a popular herb in Chinese medicine and has been linked to improving memory and cognitive functions. The unique fan-shaped leaves of the ginkgo tree make it a popular ornamental as well. It is even grown as a bonsai.

The germination of ginkgo is a little tricky, but there are a few tips that will increase your success. Freshly picked seeds are covered in a malodorous fruit. The ginkgo fruit contains small levels of urushiol, a skin irritant that is found in poison ivy and poison oak. To avoid this, obtaining cleaned seeds from a seed company is recommended.

Ginkgo biloba seeds have a long germination period and a tendency to pick up mold on the outer shell. The presence of mold on the outer shell does not automatically indicate that the seed is dead. It will be fine so long as the mold does not reach the embryo. To ward off mold while waiting for germination, sterilize the ginkgo seeds in a mild bleach solution (1:8, Bleach: Water) for a few minutes and rinse well. It might seem counterproductive to introduce bleach to a living seed. However, the solution is diluted, and the seeds should only be soaked long enough that the bleach soaks into the outer shell and not beyond.

The next goal is to allow moisture and air to reach past the shell. Nick the sides of the shell along the rim or that goes around the circumference of the seed. Do not damage the embryo. (There’s a very thin brown membrane around the embryo too, which does not have to be penetrated).

Ginkgo trees grow in areas where freezing is normal. Ginko seeds are, therefore, used to these temperatures and have adapted to respond to seasonal changes. The change from cool to warm temperatures after the winter lets the seed know it can begin growing. If you are not planting your seeds outside during the cooler weather, you will have to artificially create this experience for the seed. The process is known a moist cold stratification. Cold stratification is easily accomplished by storing the seeds in the fridge for a month. If your seeds have not been pre-stratified, you should do this before exposing them to the warm temperatures needed for sprouting. This can be done before or after nicking.

Assuming your gingko biloba seeds have been cold stratified, they are now ready for germination. Place the nicked seeds in moist, preferably sterile sand and place them in a zipper baggie. Situate them so that the seeds just barely stick up through the sand. Adding a small amount of hydrogen peroxide to the water used to moisten the sand is another option to prevent mold. 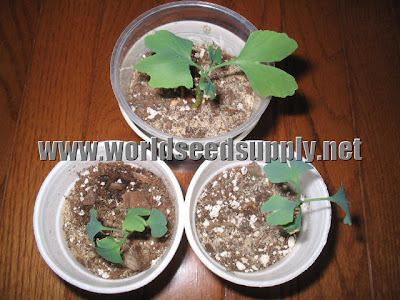 Keep the planted ginkgo seeds at temps of about 70-75 degrees. When the seeds sprout you will see the green stems press up against the bag. When you see leaf development, transplant your ginkgo seedlings to a mix of more sand than soil. Keep the soil moisture equal to that of the sand in the bag and keep out of direct sun and heavy water.