Trichocereus Chilensis is an ornamental columnar cactus from, as the name indicates, Chile. It was originally spelled “Chiloensis,” although it was later pointed out that this spelling was technically incorrect if the cactus was to be named after Chile. At that point, Chilensis was adopted, but there have been controversies over whether the original named should still be used. Chilensis is capable of forming large treelike plants up to 25 feet in height and 5 inches in thickness. It has yellow spines that turn grey with age. In its youth it closely resembles the kk242 variety of T. peruvianus, although it typically has 10-17 notched ribs. This species is also valued for large, white nocturnal blooms that can extend as much as six inches. This species does well in the ground or in medium-sized pots in locations where it has to be moved indoors for the winter. In zones 10-12 it can be left outdoors all year round. It handles full sun well and is drought tolerant once established. Waterings should be deep and infrequent. During the dormant period plants should be kept cool and completely dry. 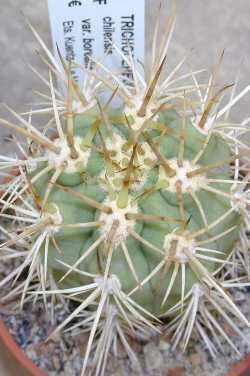