Shungite is a non-crystalline mineral, with a resemblance to obsidian or hematite. Like these other two, shungite is also used as a material for jewelry design, shungite pyramids and other decorative items. Shungite gets its name from the Shunga Village in Russia, where the original and most noteworthy shungite deposit is located. Shungite is made primarily of carbon, and the best quality (grade A) has a carbon content of 93-98%. This accounts for less than 1% of the total available deposits of shungite we know about. Higher quality shungite can be distinguished by its nice lustor, whereas lower quality examples will have more of a matte finish. Shungite also conducts electricity.

Carbon is widely used as a purifier, and so it is only natural that shungite itself is used for purification and detoxification. Shungite users add the nuggets to their drinking water to remove impurities such as microorganisms, heavy metals, pesticides and various trace chemicals that may find their way into the water supply. There is actually a lake in Russia that has been purified by natural shungite deposits. The longtime contact with shungite has removed the microorganisms to the point that it is safe to drink without further purification.

At home, the stones are added at a rate of 50-100g per liter of water and allowed to sit for about 2-3 hours. The longer the water is in contact, the better. Shungite stones can be reused, although it is necessary to regularly recharge the stones by running them under water for several minutes, then letting them soak in acidic water for about 2-3 hours before putting them out to sit in the sunlight. This should be done about once per month.

Shungite neutralizes negative ions, and it is said that shungite water is more “energetic” when you take it into your body or to water your plants. Shungite is also said to have a positive impact on skin and hair. This makes sense if you consider that hard water is rough on skin and hair, and that shungite can remove minerals that make water hard. Some people even make shungite baths. Shungite is also said to neutralize negative energy in the air. 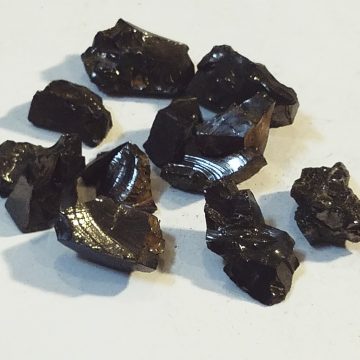