Rivea Corymbosa, also known as Ololiuhqui or snake plant, is a flowering vine related to morning glory and Hawaiian baby woodrose. All are members of the Convolvulaceae family with rivea unquestionably being the rarest of the three. Rivea’s beautiful bell-shaped flowers are white and its leaves are spade-like. This perennial climber is great for adorning fences, railings, trellis and mailboxes. Although valued as a sacred plant for hundreds of years in Southern and Central Mexico, coakihuitl, as it was called by the Aztecs, which means “snake plant”, was first described to westerners by explorer Francisco Hernandez as part of his job of describing the botanical specimens of Mexico for King Phillip II of Spain. In colder climates, rivea corymbosa should be grown as a potted plant and brought indoors for the coldest months.

Growing Information: Rivea Corymbosa seeds have a thick coat. Therefore, scarification is recommended to speed up and increase germination. Nick or file the seed coat away from the germ eye. (The germ eye is the little circular dent at the top of the seed.) Then soak the seeds until they swell up. This typically happens in 12-24 hours. The seeds should then be sown at a depth of 1/4′ inch in a rich, well-draining soil mixture. The seedlings will prefer less light at first but will eventually come to prefer full sun with maturity. This is probably because they naturally start their growth in the shade of other plants before rising into the warm tropical sun. Sprouting seeds and young seedlings are prone to rot. Therefore, a variation on the germination method is to soak the seeds for less time and then germinate them in a very lightly moist paper towel in a zipper baggie. This avoids the retention of too much water in the initial stage that could lead to rot. After the seeds have germinated, transplant them into soil. Keep plants constantly watered and provide plenty of drainage and root space. Give them something to climb once they reach about ten inches. Large plants should be trimmed back if space is an issue. 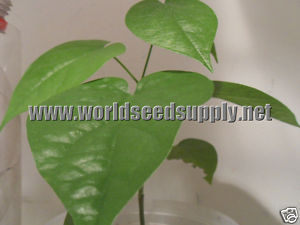