Pleiospilos Bolusii is a species of South African succulent typically found in shady areas and around sandstone. They are one of several species of cactus and succulent that is known as living stones because of their appearance. Like stones, they tend to be spotted and gray. The name actually derives from the Greek words “pleios,” meaning many and “spilos,” meaning spots. Pleiospilos is also known as split rock because it is composed of two modified leaves that split in the center. Bolusii can have leaves as long as three inches. Pleiospilos is very similar to lithops, a group of succulents which are also called living stones and have these modified leaves. A split between the leaves contains the meristem (growing point). It is from this point that these plants will bloom flowers and form new leaves. More so than lithops, pleiospilos is known to keep its old leaves as new ones form. However, they do sometimes die back, and their nutrients are recycled back into the plant. Pleiospilos Bolusii is in the same family as sceletium (Aizoaceae). Bolusii contains similar alkaloids and has been reportedly been used in a similar manner by South African natives.

Growing Information: Pleiospilos prefers a coarse, sandy soil that is low in nitrogen but high in phosphorous and potassium. These seeds should be sown like cactus seeds. Flatten out the soil and then put a thin layer of loose soil above it. Sow the seeds on the surface and press in very lightly. They need light to germinate. Mist the soil to keep it moist and cover with clear plastic. Maintain a temperature of about 75 degrees Fahrenheit. Ideally, the covering should not be flat across the top because it will cause the water to drip back on the young seedlings, which sometimes causes rot. Something like a sandwich bag often makes a better “tent? because the water will run down the sides more easily. The soil should not be allowed to dry out while the plants are seedlings. Use a mister if the soil does get dry. Place the seedlings on a heat mat (ideally) and in bright light. Placing the seeds just a few inches from fluorescent lights is ideal for starting seedlings, although natural light will work too. Note that using a heat mat will cause more evaporation, which may require more attention. Be sure to air out the seedlings once a day for best results. Established plants will require some direct light each day, whether natural or artificial. Watering should be proportional to the temperature and light the plant is given. Keep dry during the winter. It can withstand considerable drought. For active growth, the temperature should not fall below 60 degrees Fahrenheit. However, it can reportedly stand brief stints down to 40 degrees. 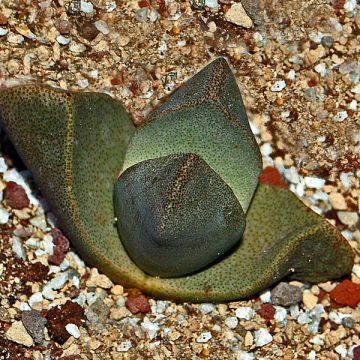