Nymphaea Caerulea, which is a synonym for the more proper nymphaea nouchali var. caerulea, derives from the banks of the Nile and has many similarities to nelumbo nucifera. Because of these similarities, the two are frequently confused. However, nymphaea caerulea, which is frequently called blue lotus, is in fact a water lily and not a lotus. The fact that they are both referred to as “sacred” and have similar narcotic and sedative properties coupled with the fact that nelumbo nucifera actually does have a blue variety adds to the confusion. Like nelumbo nucifera, nymphaea is symbolically significant, and it has frequently been depicted in ancient Egyptian art and temples. It is very likely that caerulea is the legendary psychoactive lotus depicted in Homer’s Odyssey. Used similarly, the active principles of nymphaea caerulea are reportedly analogous to those in nelumbo nucifera, which is said to produce feelings of relaxation, clarity, lightness and well-being. The seeds of nymphaea are drastically smaller than those of nelumbo. The petals are also skinnier which makes them appear pointy and triangular, whereas those of nelumbo are fatter and rounder. The cool blue hue of caerulea also makes the plant seem mystical and surreal, so it is no wonder it has been chosen for symbolic significance throughout history. ASK ABOUT OUR WHOLESALE BLUE LOTUS.

Growing Information: Nymphaea caerulea requires full sun, fertile soil and will benefit from regular fertilization. It is best grown in about a foot of water. Because of its heavy nutrient demands it tends to fight off algae that compete for nutrients. Seeds are best off being started in pots submerged two centimeters below the surface of water in some sort of basin big enough to hold all your pots. The pots should be filled with a rich, clayey loam and the seeds pressed into the surface before submersion. For this process, it is recommended that you use bottled, distilled or clean rain water rather than tap water to fill your basin. Reports of using seed propagators have also produced positive results with these seeds for at least one grower that we know of. Plants may be grown directly in the ground, which should be bedded with fertile soil, or in pots that are sunk below the surface of the water. Once established, it can easily be propagated by dividing the rhizomes. Being from warm locations naturally, this species requires steady warmth of about 75 degrees throughout the germination process. 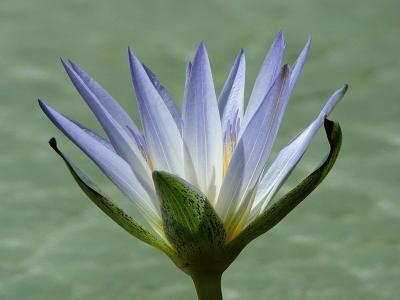