Klip dagga (leonotis nepetifolia), also known as Lion’s ear, is closely related to wild dagga (leonotis leonurus). Both are similar in that they have gorgeous bright orange flower clusters and are used similarly as medicinals for things like stress relief, fever and cough. Klip dagga has been naturalized in a wide range of tropical areas, including South America and Hawaii. But it can easily be grown in the summers of most locations on earth.

Both wild and klip dagga have their own advantages. Klip dagga is said to be very much the stronger of the two and emits a very skunky aroma that many people find particularly pleasant.  However, the idea about strength seems to pertain more to the leaf material and perhaps the petals.  Klip dagga pods tend to turn brown with maturity and are usually less desirable than those of leonotis leonurus at that point. If you can dry the pods before they set seed, they will remain green. But they are essentially clusters of needle-tipped capsules, and that make handling particularly annoying and painful.

Klip dagga has much larger leaves though, and they produce much more biomass. The biggest of klip dagga’s heart-shaped leaves can be the size of an adult hand, and the plants can reach upwards of 10 feet in just a few months of outdoor growing! Klip dagga can be grown indoors too, and it will even set seed. But the plants will only be a small-scale model of their outdoor counterparts.  Klip dagga also sets seed much more readily than wild dagga, and it will usually reseed the area it is growing in so that you do not have to buy or sow seed every year. You can tell the two species apart by their seeds.

Although similar, klip dagga seeds are shorter and fatter than the longer, thinner wild dagga seeds.  We’ve encountered many vendors who have the two species mixed up. Even print catalogs of some pretty large companies have mistaken leonotis leonurus as leonotis nepetifolia. You can be sure that we know the difference, and you have the option of ordering both species from us. SEEDS ALSO AVAILABLE!

This is not commercial leaf. It is grown by us organically in limited supply. 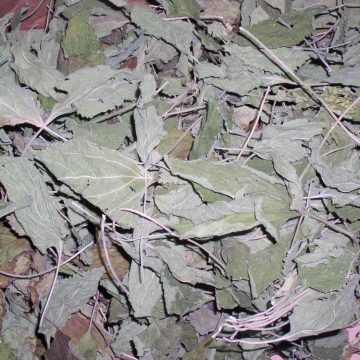