Justicia Pectoralis is largely undiscovered in the U.S. despite a long history as an ethnobotanical herb in Brazil, Ecuador, Venezuela and generally across Latin America. Pectoralis is one of 300 species of Justicia. The Stenophylla variety of pectoralis, first described in 1958 by Emery Clarence Leonard, is generally considered to be the most important of all justicias. It has a stockier growth with narrower leaves than other varieties of justicia. Infamous tribes such as the Shipibo, Tarahumara, Yanomamo and the Waika? of Brazil employed the fresh and dried leaves in avenues of ritual and medicinal use. Justicia pectoralis was often used as a tea or decoction, and it was a common admixture herb. A decoction of justicia pectoralis leaves was believed to bring about good luck in fishing, according to Shipibo Indians. Yanomamo women decorated themselves with bundles of justicia leaves placed into holes in the earlobes, and it has been used as a female aphrodisiac. Justicia tea was used in folk medicine as a general tonic. Justicia was used to calm nerves, treat depression and soothe restlessness. A decoction of justicia pecotralis leaves was also widely used across Latin America to alleviate cold and flu symptoms, including runny nose, fever, cough, headache, weakness, loss of appetite and vomiting. Justicia pectoralis also seems to benefit the stomach in cases of heartburn and colic. Chemicals such as betaine, justicidine B, umbelliferone, benzopyrane and various coumarins have been isolated from the plant, but justicia?s chemistry and enthopharmacology are still not well-understood. Coumarin and umbelliferone are thought to have relaxant and anti-inflammatory properties. Cumarins, especially in the dried leaf, also have pleasant aromatic properties for which the leaf has been especially valued. Coumarins are the same substance that is found in sweet grass and sweet woodruff. Coumarin has been used in the fragrance industry, and it is an anti-coagulant. Coumarin is a precursor for warfarin, a popular blood thinner known by the brand name Coumadin. This seems to explain justicia’s folk use in treating heart conditions. We are proud to offer live plants of this remarkable and understudied herb.

Growing Information: Justicia Pectoralis is a jungle plant that does well in low-light conditions. For that reason, it generally makes a good houseplant. It likes a deep, rich soil with plenty of moisture-holding capacity. The stems readily form aerial roots, which makes reproduction via cloning an easy process. It is possible to reproduce from seeds, but cuttings are the primary method. 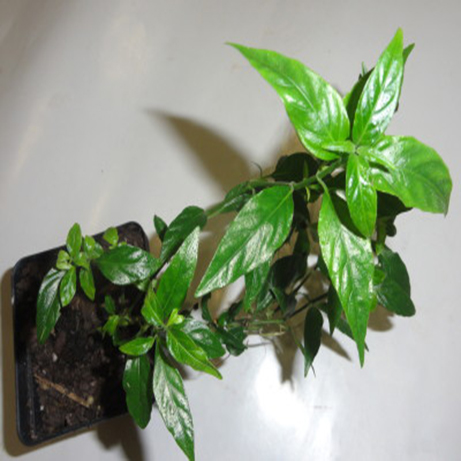