Chrysanthemum vulgare is synonymous of Tanacetum vulgare aka Tansy. It is a hardy perennial herb that grows to about 4 ft. / 1.2m, with pinnate leaves and a camphor scent. There are a number of chemotypes, with scent of rosemary, artemisia, or eucalyptus. These essences make it a useful insecticide, and many growers plant tansy in their gardens to help control pests. Tansy is an ornamental herb with golden button flowers. It is a bitter plant that is also included in liqueurs. In Medieval times, it was eaten in dishes as a penance at Easter rites. The name derives from the Greek word athanasia , meaning “immortality,” reflecting the fact that Tansy can stay in bloom for a long period. In ancient Greece, corpses were packed with leaves to preserve the body and word off insect until burial took place. The plant also produces a yellow dye. Seed counts are estimated by weight.

Chrysanthemum vulgare aerial parts, like those of wormwood, were once used for treatment of worm infestation of the gut. Today this herb is less used for medicinal purposes because it, also like wormwood, contains thujone, which is associated with toxic effects. It can have negative side effects on the uterus; therefore, it can harm women who are pregnant or trying to become pregnant. It was traditionally used as a bath to help alleviate joint pain.

Growing information: Chrysanthemum vulgare should grow in a well-drained soil that is mildly acidic and mildly alkaline, in full to partial sun. It is propagated by planting the seeds in the spring or by semi-ripe tip cuttings during the summer. Seeds should be surface sown on moist soil. Take measures to keep the seed from blowing away. Tansy can grow very invasively so in garden beds the rhizomes should be kept under control. Tansy has average water requirements.. Water regularly; but do not overwater. Tansy is a natural insect repellent and can be grown in pots to be kept outside around entertainment areas. Indoors, dry tansy can be used to deter ants, moths or fleas. Tansy should be planted with potato crops to deter the highly destructive Colorado beetle. Harvesting should be done during flowering. 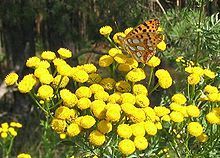