**ATTENTION**THESE SHIP FROM OUR GROWER IN FL. SHIPPING INCLUDED IN THE PRICE

This is World Seed Supply’s own clone. We grew our original mother plants from seed and named it, “Sweet Dreams” in contrast to the bitter Calea Zaatechichi. At the time, it was thought to be a subspecies of calea zacatechichi,  These plants are clones of that original plant. “Sweet Dreams” plants are specimens of the so-called”non-bitter” or “sweet” variety.   The non-bitter type has long been the predominant type of plant that people buy and trade when they speak about calea, even though the bitter herb  is most commonly what is found when getting dried calea leaf.  We also offer two bitter clones, called Rest in Peace and Satellite.

After many years of debate within the community and even reliable sources, such as Erowid, posting info showing this plant to be a non-bitter variety of calea zacatechichi, we have come to find out that the true genus and species name for this plant is chromolaena odorata. Although not the subspecies of calea people thought it might be, it is a very useful medicinal plant that was used by the Mayans. It is known as “Hatz” in Mopan Mayan language. Coincidentally, Hatz has actually traditionally been used for insomnia and nervousness, so it could indicate that the plant has some type of relaxing effect that could affect dream activity.

Although testimony about  all dreaming herbs, whether they be calea, silene capensis, entada rheedi or mugwort, range quite a bit from person to person, there are certainly enough reports to suggest the potential for both types of calea to potentate dream activity.   Aside from individual variation and variation in samples, it also appears that most testimony, positive or negative, is based on experiences that involve far less material than what was traditionally used.

Besides it potential as a dreaming or sleeping herb, Hatz has other medicinal potential. It was traditionally used as an analgesic and for toothaches. But it’s most significant potential seems to be in the area of antimicrobial activity. We actually had a customer call us and tell us that this was one of the most effective plants he’d found for cold and flu. Upon further research, we found that chromeolena odorata is listed in a number of sources, online and in print, as a remedy for cold, flu, dysentery and as a treatment for wounds and burns. It is described as an antifungal, antimicrobial, anti-inflammatory, antioxidant and  a detoxifier.

As a houseplant, non-bitter calea is a quick grower and is one of the easiest plants to care for. It tolerates a wide range of light conditions and can be grown indoors or out. But it can easily become invasive outdoors if left to go to seed. It is a noticeably easier to grow than the bitter variety, particularly indoors.  Non-bitter calea grows taller and thicker, and it seems to recover from drought better.  It is also easier to clone.  The leaves are more triangular, and they bear a nice fragrance that resembles that given off by a tomato plant. 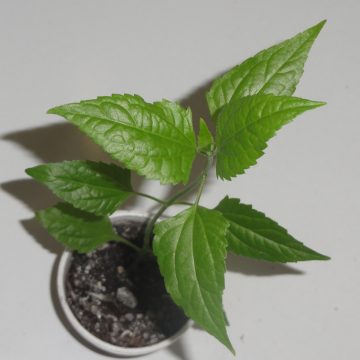