Sophora secundiflora is a slow-growing evergreen typically found around Texas, northern Mexico and New Mexico. Growing up to thirty-five feet, it has violet-blue flowers that are pleasantly fragrant and silvery seed pods each containing 6-7 red seeds (beans). The beans, known as mescal beans, are highly toxic, containing the amino acid cystine, which is related to nicotine. Despite the dangerous and destructive effects it can have on the body, mescal beans were reportedly used for shamanistic practices by at least twelve tribes in the areas where it is found naturally. This association combined with the bean’s name has led some to false assumptions that the beans contain mescaline. Perhaps the term mescal was actually derived from the fact that mescal beans are used to adorn the uniforms of the leaders of peyote ceremonies. In addition to the tree’s ornamental value, the beans have long been used in traditional tribal craft and jewelry making. An infusion of the seeds has also been reportedly applied to the ear as a treatment for ear aches. But modern use is virtually unseen due to the toxicity of compounds found in the seeds.

WARNING: Despite this plant’s beauty, the seeds contain compounds that are poisonous if ingested. Do not ingest for any reason and keep away from curious pets and children

Growing Information: Nick your seeds and soak them overnight in hot water. Plant them at a depth of one inch in a sand/loam mixture. Keep the soil damp, warm and well-lit. This plant thrives in full sun in hot conditions. Soil should be alkaline and well-draining. Keep soil relatively dry except when the tree is in bloom. 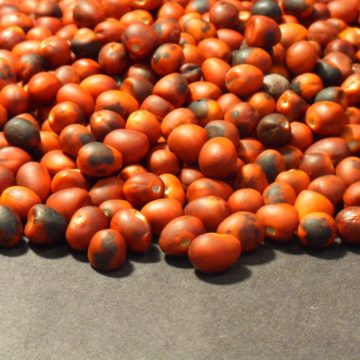