Heimia Myrtifolia is considerably rarer, although similar in appearance and medicinal use to its cousin, Heimia Salicifolia. Heimia was used traditionally by a number of Native American cultures, particularly those occupying Mexico during the 1800’s. It is either heimia salicifolia or myrtifolia that is pictured on the Aztec statue of Xochipilli, or “Prince of Flowers”. It is hard to distinguish since the two are so similar. Some reports suggest that myrtifolia may be more pharmacologically active than salicifolia. Sedative, analgesic, anti-anxiety, antispasmodic, diuretic and various other properties have all been attributed to the herb. It was used a salve, tea or dried extract. Today, the plant is grown as an ornamental with attractive five-petaled, yellow flowers. It is hardy to zone 8 and easy to maintain. 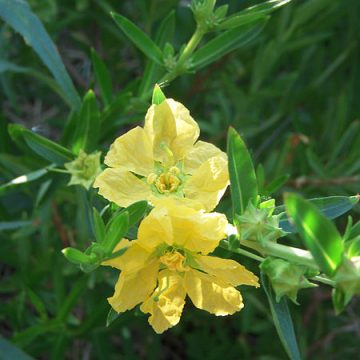